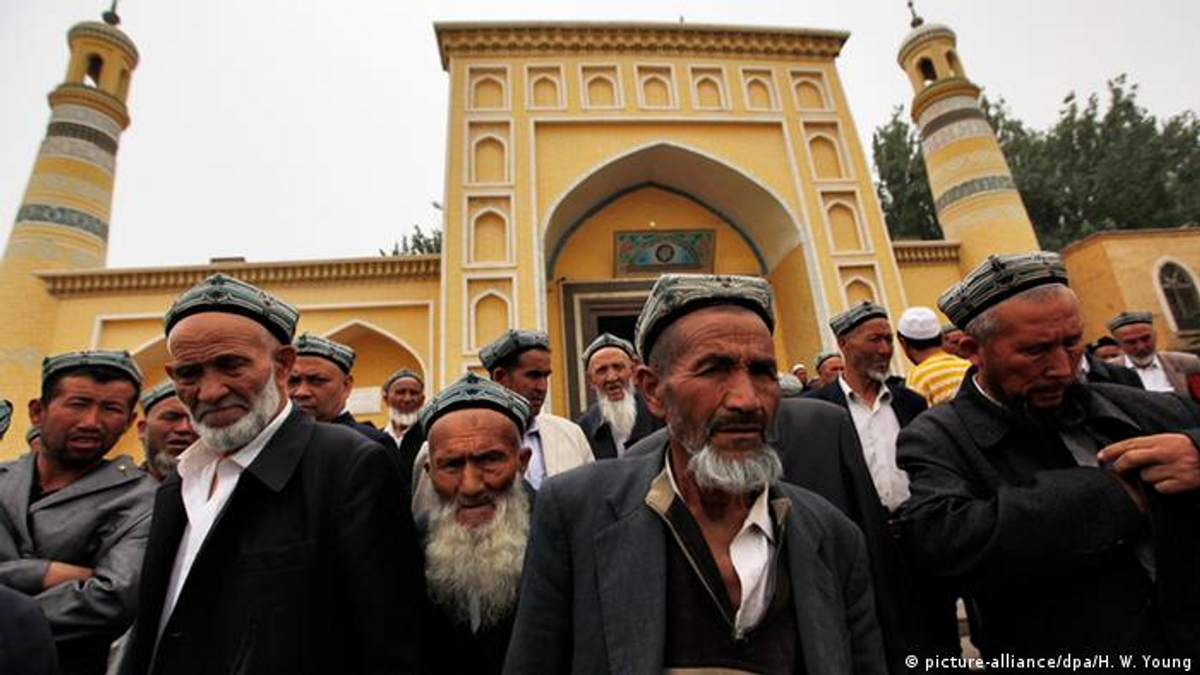 China is being viewed as a repressive State for over seven decades now. First, the Peoples Liberation Army (PLA) of the Chinese Communist Party (CCP) occupied East Turkestan in October 1949. By this time, the province had become Muslim majority through the same means that civilisation across Asia had faced the Islamic repressions over centuries. The Islamists exterminated the fewer left over Hindus of the Kushan period, the predominant Buddhists of 7th century and the Mongols & Hans of 10th to the early 20th century. They had declared independence from the Han and Hui clans though their known approach that Islam has been committing since Mohamed’s time “Convert, Flee or Die”. The Radical Muslims were unacceptable to the CCP hence, after the occupation, they started resettling Han and some other clans in the region. As a result, what was nearly 90% Muslims in 1949, are believed to have been diluted down to 55-60% by now. Unlike many parts of the world where Muslims have proliferated (some comparing it with cancer), the percentage of Muslims has reduced in Xinjiang over many decades.

Of late, several antagonists of China have been raising voice against their expansionist agendas…be it Xinjiang, Tibet or Hongkong. The Human Rights situations in all these States are precarious and that is the reason, the voice for an independent inquiry by the UN Hun=man Rights panels have been growing louder. China has been resisting any investigation or fact finding mission of reported genocide in these provinces. For the first time, UNHRC Chief, Ms Michelle Bachelet will be visiting Xinjiang. However, experts believe that she will come out empty handed. Chinese will orchestrate her visit in such way that she finds nothing and then the Chinese media will go wnangho, with propaganda…soughting no HR abuses in China…be it Xinjiang, Tibet, Hongkong or elsewhere. However, all said about Chinese repression of Uyghur Muslims, it is a hard fact that Islamic intolerance and radicalism is the root cause of the Islamic terrorism, something that China will never allow…and many agree with this rationale. It may be prudent to examine the history of Xinjiang.

The ancient name of Xinjiang in 2nd century BC was Kashgar, a very strong state under ‘Kushan Empire’ mostly inhabited by the ‘Yuezhi’—a loose confederation of Indo-European people. At least the part of Yuezhi had Dravidian Indian links, spoke Tamil written in ‘Kharoshthi’ script that resembles the modern Chinese. Buddhism spread from India was flourishing. The last of the king ‘Kanishka’ had the most glorious reign extending from Bukhara (now in Uzbekistan) in the west to Patliputra in the Ganges (Ganga) plains in the east; from the Pamirs mountain range (now in Tajikistan) in the north to central India in the south. His capital was probably in Purusapura (Peshawar, now in Pakistan). He may have subjugated the kings of the city-states of Khotan (now Hotan), Kashgar, and Yarkand (now Xinjiang), of the Han emperors of China (https://www.britannica.com/biography/Kaniska).

After the 1st century AD, with the decline of Kushan, the provincial kings got independence and ruled the divided kingdoms. Later some part of it were won over by the Han Empire of China. In 4th centuries Turkic people got hold of it and it became East Turkistan, residents of Kashgar later became Uighur tribes. A tug-of-war continued in the rules thereafter. The Kushans were confined to Gandhar (Kandhar in Afghanistan). The Uighurs and remaining Yuezhis & Hans of East Turkestan and Gandhar suffered a lot in the coming centuries, under Chenghez Khan and his son Kublai Khan ruled from year 1211 to 1678. Later when Islam came from the Arabian Peninsula, a repressive rule prevailed. In the ensuing period, non-Muslims were either converted, made to flee or killed…just as it happens in any other Islamic states.

Uighur Muslims pressed Islamic nationalist agenda successfully twice to obtain freedom from China once from 1933 to 34 and again from 1944 to 49. Thereafter, the Chinese got the total hold on them curtailing their radical activities, jailed the terrorist elements and started diluting the Muslim majority by sending the central Han people. Some Hui Muslims who don’t believe in radicalism, also were sent to settle in. The native Uyghur Muslims have been reduced to 2nd rated citizen esp after 9/11 terrorist attack in US. They have been grouped with the terrorists as many of them have acquired terror training in Pakistan & Afghanistan, presently carrying out terrorist acts in Afghanistan and Kashmir. Many Uighur Muslims were bodyguards of Osama Bin laden. As per Chinese ambassador to Syria, almost 5000 of them are believed to have joined ISIS. East Turkestan Islamic Movement (ETIM) and the Turkestan Islamic Party (TIP) are known to be Jihadi outfits banned by the UN, with their leaders hiding in Pakistan.

After the US global war on terror post 9/11, the Chinese govt have stopped Madrasas education, prayers in mosques and Quranic religious teaching to citizen below the age of 18 yrs (https://files.eric.ed.gov/fulltext/EJ1207558.pdf, pp-27). Most of the adults who were educated in any Madrasa or Islamic nations, are picked-up to de-radicalise in the “education and transformation training centres”(教育转化培训中心)or “Counter-extremismTrainingSchools”(去极端化培训班), for months or years…depending how quickly they give-up their radical beliefs. In the last one decade or so, Islamic radicalism in the world is growing like wild-fire esp after the ISIS call for Global Islamic Caliphate. Radical & Jihadi Wings of Islam is out in the open in all Islamic nations. No one dares to question how the non-Muslims in those nations have vanished in thin air, not even the Human Right Council of the UN. The UNHR council is proactively taking note on Rohingya Muslims and Kashmiri terrorists but they are absolutely mum on the religious persecution and plights of the Christians, Hindu and Sikhs in most of the Islamic nations, esp in Egypt, Turkey, Syria, Lebanon, Pakistan, Afghanistan, Bangladesh & Malaysia. Same is the state of the Buddhists in Tibet. Islamic radicalism and Jihad in India have already been elaborated in this magazine (Issue 2:09, page-10). In China too, it has been a threat for quite some time. China made itself an atheist state. Following the Cultural Revolution (1966-76) all religious traditions, rituals and acts were prohibited to remove any challenge to a new emerging concept of Maoism. There was a deep dissatisfaction among the nationals due to it and finally the state had to give-in…in 1978 with guarantees of "freedom of religion" through article 36 in their constitution that stated: -

“Citizens of the People's Republic of China enjoy freedom of religious belief. No state organ, public organization or individual may compel citizens to believe in, or not to believe in, any religion; nor may they discriminate against citizens who believe in, or do not believe in, any religion. The state protects normal religious activities. No one may make use of religion to engage in activities that disrupt public order, impair the health of citizens or interfere with the educational system of the state. Religious bodies and religious affairs are not subject to any foreign domination.”

Muslim bigotry against the non-Muslims are authorised in Quran and that shown in Xinjiang too…against the fellow Han minority. Kazakhstan and Kirghizstan are clandestinely supporting Islamic radicalism. Buddhists and Christians have been mostly wiped out from these Asian countries and the middle-east. The local Islamic govts as well as the World Human Rights Council seldom take note of the minority rights…and mind you, these non-Muslims are no threats to them (unlike Muslims in non-Muslim countries); they are no radicals; no terrorists; no jihadists. In such an indifferent world, would non-Muslims cope-up just in case the Uyghurs grab the powers?

Was there some injustice done to the Uyghur Muslims? Possibly ‘Yes’ esp in the present context. Who should claim the legitimacy to Xinjiang/East Turkestan/Kashgar/Shule? Why not the original Hans? Why not the Yuezhi? Why not the Buddhists? Why only Muslims? All four share a substantial part of religious history of the beleaguered nation. Just like the present Muslims force the conversions on all others, let the Han ruler of Xinjiang adopt the same methods that Muslims used. Let the entire Xinjiang be re-converted to Han and then let the question of the legitimacy of Xinjiang be decided. If the Chinese govt is adopting some repressive measures against the radicals, it may be justified.

Coming to the present Human Rights Chief visiting Xinjiang, many feel that her visit too is partisan. Why the UNHRC is only concerned about Muslim repression in China and why not the Buddhists in Tibet? It is a foregone conclusion that the Chinese will pooh-pooh her visit as propaganda, something that they have become experts in. All said, it is a fact that radical Islam is becoming a headache for the world communities and maybe, Chinese way of controlling terrorism and Jihad on its land may be one of the approaches that non-Islamic nations may have to adopt.