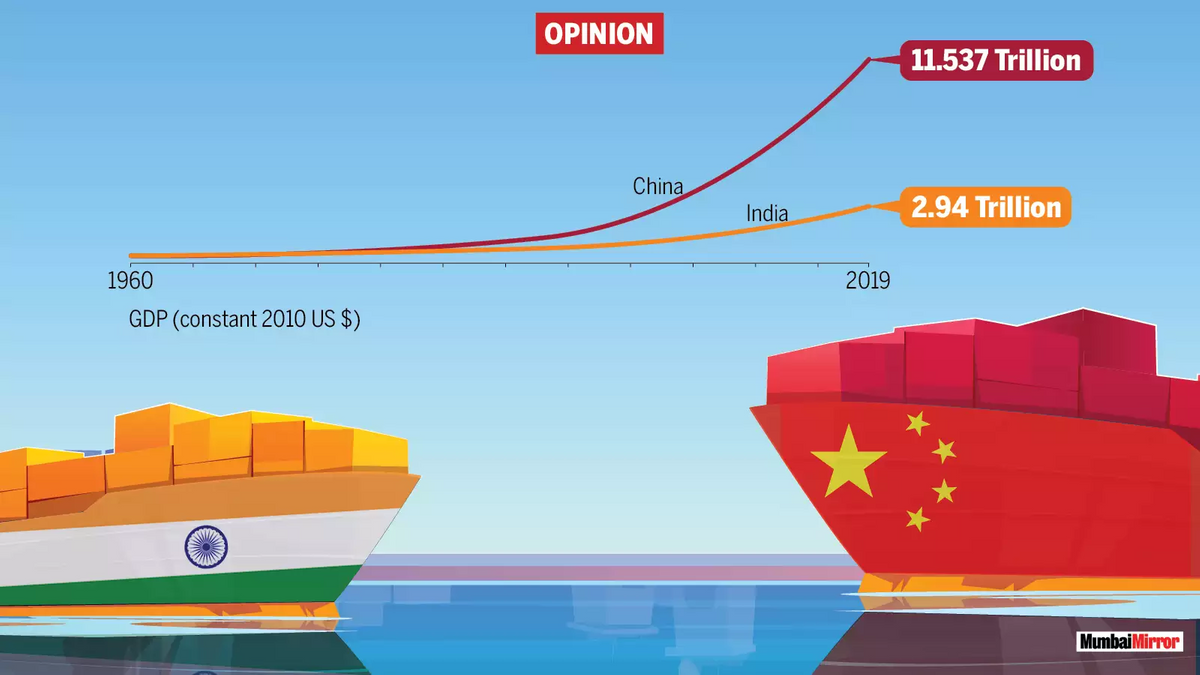 China has undoubtedly caught the world attention by a unique way of its economic progress. The Chinese leadership knew all along that its agricultural production as well as manufacturing sectors had huge potential. Since all these assets were under the control of the state, the individuals working in all sectors had little incentive to work more, produce more. So, the state made a gamble of letting the labour force work more, produce more and keep a share of the higher produce. This worked like magic. Every individual worked more; they updated their techniques that yielded more. They entered an era of rampant IPR violations. They seldom imported a technology. They started stealing an advance equipment,product from abroad, copied it by reverse engineering and started making the final product with some indigenous touch in the design. With the cheap labour force in China, the manufacturing cost was much less. In addition, China vehemently hoodwinked the International or World Trade Organisation (WTO) by providing huge subsidies in the manufacturing of their products/produces that were sold cheaper than the other countries. Within no time, the cheaper Chinese products were flooding all markets even if at the cost of the inferior qualities. Consumers look for cheaper products and China provided it. As a result, within years it paid dividend, giving huge surplus. It provided a huge push to their GDP. Today China has huge stock of cash collected from the world trade and comparatively very little expenditure on their lowly paid work force. Their employees are one of the lowest paid among major economies of the world.

The surplus funds gave them opportunity to invest on all such infrastructures which couldprovidethem rich returns in the future. Thus, they started several new ventures, manufacturing, infrastructures around the world. By far their investment in military hardware must have been substantial which in turn, provide them to export it. Most such militaryhardware are the stolen technologies of the US and Russia, copied designs sold at much lower cost as compared to the originals. Initially those countries closed their eyes to the gross violation of the Intellectual Property Rights (IPR) by the Chinese which later became such a problem that US had to take punitive steps.

The Chinese surplus funds are fairly large. Their aid or loans were traditionally surrounded in secrecy. In the initial years, they were trying to win over the poorer nations who were dependent on US aid. Some of the aids were as much for the betterment of the lender countries as was serving the interest of the donor. They provide aid in various forms including comfort (or Technical) money to smaller and bordering nations such as Pakistan, Srilanka, Nepal, Bangladesh, Myanmar, Philippines, Mongolia,Tajikistan and so on. The political parties of these countries have even received non-refundable money for their elections and comforts. It is estimated that China spent around $354.3 billion aidover the 15-year period from 2000 to 2014. Strangely just about 22% of the total aid was spent on Official Development Assistance (ODA). Chinese funds and aids weresanctioned for>4,300 projects in about140 countries withAngola, Pakistan and Russia benefiting the most. African countries constitute 7 of the top 10 recipients that include Cuba (~ $6.7 billion), Cote d'Ivoire ($4 billion),Ethiopia ($3.7 billion), Cameroon ($3.6 billion) and Nigeria. The spending on ODA grew steeply from $2.6 billion in the year 2000,to $69.6 billion in 2009 and about $90 billion in 2018. These are huge funds being invested in smaller countries mostly thru’ their Belt & Road Initiatives (BRI) which at a glancesuggest as if supporting thosenations in southeast Asia, central Asia and east Africa. However, if analysed carefully, it is not. Today’s reality is that the Chinese export is the maximuand hence, the BRI’s raod connectivityis in China’s own interest but at the cost of the others. Such investments on infra projectsfar beyond the repaying capabilities of those countries,increasingly putting them in to the ‘debt Trap’. Sri Lanka, Pakistan, Jibuti and Angola have already fallen prey to the Chinese debt traps leasing out their lands, permitting military bases or handing over their rich resources such as oil wells or mineral resources. Many others will fall prey in the coming years. The slush moneythrown away by the Chinese, also make their leaders corrupt.

On 11 January 2016, the PLA created ajoint staff directly attached to the Central Military Commission (CMC), the highest leadership organization in the military. They were divided into 15 functional departments instead —a significant expansion from the domain of the General Office, which isnow a single department within the Central Military Commission.

Military might of any nation is the direct product of its military (defence) expenditure. Most of the nations have a clear-cut budgetary allocation for the Defence services that includes all its expenditure heads including pensions. That however, is not the case with China.The Chinese CMC has a complex budgeting. Unlike a Democratic nation annual budget, the Chinese have several CMC heads that are budgeted separately and they have plenty ofsurplus funds too. The reason for it is that only a small part of their GDP is spenton humanity. Their work forces are paid lowly compared to other nations. This is the reason they have huge slush funds. All secret and invisible (from public eyes) expenses of the Chinese govt are seldom revealed. So, if China says it has Defence budget of $250 billion, the effective outlay is surely much more.

Leaving the grey defence expenditures away, today the China is the second largest economy and second largest in Defence Expenditure too. We know the Chinese have the cheapest products. In military too, the Chinese equipment are reasonably cheap so as to be competitive in the world market. It is no secret that the quality of the Chinese equipment is often of suspect,far below the American or some of the European or Russian products. So, they have far larger numbers...of guns, tanks, artillery, armoured, air defence, missiles, aircraft, naval vessels and so on. The numbers of the Chinese naval vessels even outnumber theAmericans. This is the reason the Chinese try to avoid a direct military conflict where the inadequacies in their equipment will surely make them vulnerable. However, they have committed massive theft of the American & Russian sophisticated equipment designs. Hence, it may not be long before they come close to restoring parity.Chinese fighting forces come under the followings: -

The Ground Force, the Navy, the Air Force, the Rocket Force and the Strategic Support Force. Total ~25 lakh.

Chinese Tanks include their ‘NORth INdustries Corporation’NORINCO Type-99, 96, 85, 80, 69, 63, 62 & 60. Main Battle Tanks (MBT)-VT-4, type 96, 85, 80 & 69. Similarly there also have long list of self-propelled armoured Veh, artillery and infantry guns. Their indigenous manufacturing provides them with the opportunities to have several variants and large numbers.

PLA Air Force (PLAAF): Approx 3.9 lakh personnel in 24 Air Divs each having 2-3 Aviation regiments and each regiment having 20-30 aircraft. The approximate numbers of aircraft include Fighters 1232; Trainers-324; Transport-224; Helicopters-911; Attack Hptrs-281. The frontlineaircraft for the Chinese are bulk of Russian Su-27, 30, 35 and indigenously produced J-15, 11, 10, 8 & 7. Chinese have recently induced J-20 aircraft as a reverse engineered stolen stealth technology. However, it lacks the performance capabilities. On that note, all aircrafts of their J series are the stolen technologies of Russian or American aircrafts but far short in functional capabilities. PLAAF also has H-6 series of Bombers based upon the Russian TU-16 design. However, since the Chinese have long back started producing the indigenous aircraft of whatever dubious performance capabilities, their numbers are high. Chinese AWACS (KJ-2000 & 200) are far short on performance but they have nearly 20 of them. Somewhat more advanced KJ-500 is in making. Since the avionics in the Chinese aircraft are not very advanced, they have made a special task aircraft GX-11 for the electronic counter-measures of jamming. In general, Chinese aircraft are heavier, less agile, have shorter range of operation, lack high altitude Ops and their avionics have dubious performance capabilities.

Rocket Force: The Rocket Force has about 1 lakh personnel in six missile divisions. This has all Ballistic Missiles placed under different operational theatre commands. Like India and other major powers, Chinese too have the capability of launching the nuclear capable missiles from all three platforms of Ground, marine and airborne.

Strategic Support Force: Comprising of approx. 1.5 lakh personnel handling the assets of operations such as space, cyberspace and electronic warfare operations units, independent of other branches of the military. In space, Chinese are understood to have done massive militarisation. They have massive rockets (Long March 5B rocket) that can carry huge payloads...to the tune of 14-25 tons with strap-on motors. China is the first nation which is heading for 2 space stations of its own for the purpose which is not very clear. It is believed that these space stations will be for semi-military purposes incl a possible militarisation with missile launch and anti-satellite (ASAT) capabilities.

The above brief view of the PLA shows the resolve of their leadership to build a strong Defence Force. The Peoples’ Liberation Army is at the centre of it. Their military hardwarehas been built-up over a time. The PLA has risen from the shadows of the erstwhile Communist Guerilla Force (of Mao Tse Tung) involved in their liberation struggle against the Japanese and other occupation forces. It used to be a low-tech guerrilla force which latertransformed in to an army that captured Tibet without any resistance and re-occupied East Turkestan, Inner Mongolia and Manchuria. However, their economic transformation and subsequent reverse engineered military hardware haveprovided them muchstrength. Such indigenous development started since late 1980s at a brisk pace. Right after the break-down of the USSR, the Chinese left the Russians behind in the numerical count of the low-tech military hardware. In the2000s, they started stealing the Russian and US high tech military designs and copiessuccessfullyto a large extent. They copied equipment range from the advanced aircraft like SU-27, F-35, the advanced naval vessel designs, the rocket technologies, tothe spacecrafts and so on. On the numerical strength, the Chinese Navy has the largest number of vessels, the military has the second largest hardware and the Air Force has the 3rdlargest count of the war planes in the world.

Our Defence Minister Rajnath Singh claimed on 26 Sep 20 “Today,in 2020, Indian armed forces engage with Chinese forces on equal footing and have developed strong capabilities to give a befitting reply to those who keep an evil eye on India” in a keynote address at “Self-reliant India” seminar in Rajasthan. Immediately, some agencies tended to draw parity of the Indian Armed Forces with PLA. However, that is not the caseif one looks at the military hardware of China. It will take at least 20 yrs and 10s of trillion dollars worth of funds if we sought to draw paritywith China. Such expenditures will inflict a huge cost of constraining our socio-economic growth. Since India at no time sought to invade and grab others’ territories, we need not compete with theworld powers to draw parity. Our ambition of being regional or world power has to be only after we achieve the economic strength. At present our military strength need to be just enough to defend ourselvesagainst our adversaries. We need to keep our armed forces slightly above the half mark of the joint Pak-China-Bangladesh strength. Bangladesh friendliness to India cannot be guaranteed for long. Any radical Islamic party assuming power there will soon start posing threat sooner than later, duly assisted by China and/or Pakistan.