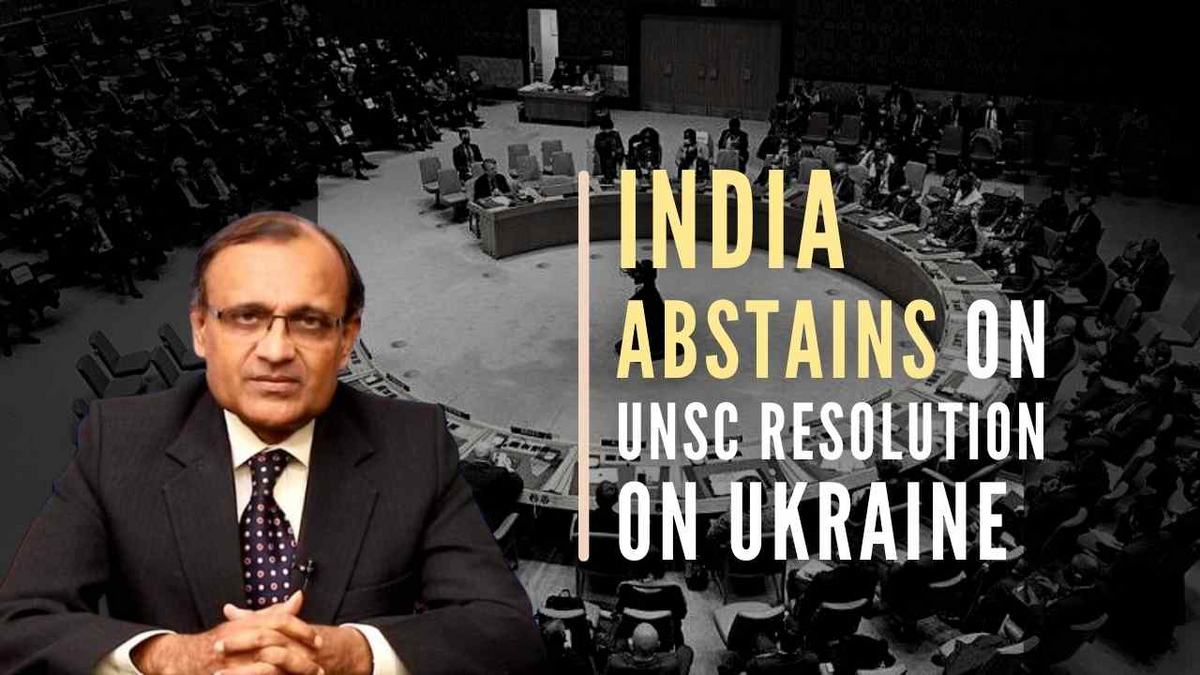 One Reason for Indian neutrality on Ukraine Issue

India has come under sharp criticism esp by the US for remaining neutral, for not picking its side in the recent Russia-Ukraine war. There is no doubt that this war has exposed the human tragedies of smaller and weaker nations. There is no doubt that Ukraine deserves to be treated as a sovereign nation. There is also no doubt that Russia has indulged in violating the sovereignty of Ukraine. There is absolutely no justification in why Russia should have indulged in forcing war and displacement of millions of the peace-loving Ukrainian people. Despite all these, why India has chosen not to side with Ukraine, perturbs many. There are several reasons as to why should India side with or not side with Russia, European Union (EU) or America led NATO. This article tries to explain; and above all, the author picks up one reason as to why it should not take sides; at least at the present juncture of the war.


Siding with either blocks. Siding with Russia is likely to annoy most if not all other EU/NATO members, some 30-odd of them. It may hurt India in its trade with the 30-odd nations that often behave as a single block (as they have become now while dealing against Russia). The impact could be significant. On the other hand, siding with EU/NATO will annoy Russia and may be their CIS allies (eight of them). This may impact India to lesser extent although we depend a lot on Russia for major military supplies. Russia has been India’s all weather friend during some difficult times too and thus, has an emotional relationship too. On the other hand, India has been able to maintain good relations with EU/NATO esp in the last two decades or so although, there have been some aberrations in sustaining it. Hence, India may either choose to be pragmatic in its approach when it comes to taking sides in the coming times too; or absorb pressures from either side to remain neutral. In the author’s view, the latter option is the choice for now.

Russia helping India with crucial Vetoes at the UNSC. The reasons why India should side with Russia are several. Among these, some of the pronounced reasons include Russia with its Veto coming to the rescue of India six times in past when cornered at the UNSC. Besides the Veto, USSR and Russia has stood-by India in most of the UN/UNSC/HRC voting. In most such instances, USA and Europe were against India.

Trade Relations of Crucial equipment. India has also been dependant on USSR/Russia for its Defence sector. USSR supported India with many technological knowhow in setting up many industries esp Energy sector, Military hardware (incl MiGs, Su-30, Antonovs, Ilusins aircraft, T-90 tanks and submarines), machineries, Steel and Aerospace among others. A need for advanced technologies in defence mandated diversifying when military hardware from Britain, France, Germany etc were also resorted to. American equipment was introduced in the recent decades when political relations eased with them. In the recent decades, trade volume with Russia did decrease but in 2018-19 it picked up again esp in Defence sector. After Russians apparently improved their military trade relations with Pakistan (MI-35 Hptr, JF-17 Engines, Joint Military exercises etc), India looked it with suspicion with a bit cold shoulder.

Political Relations. The Indo-Russian Inter-Governmental Commission (IRIGC) was set-up to conduct affairs at the governmental level between both countries. It is divided into two parts, the first covering Trade, Economic, Scientific, Technological and Cultural Co-operation and the second part covers Military Technical Co-operation. BRICS, SCO and BIMSTEC are other platforms of interactions and relationship with Russia that has become cold after Chinese misadventure on the Indian frontiers. On the other hand, USA started coming closure to India after nuclear sanctions were waived-off. India became a major defence partner of the US in 2016, signed the Logistics Exchange Memorandum of Agreement (LEMOA) and the Communications Compatibility and Security Agreement (COMCASA). The idea of ‘Indo-Pacific’ through QUAD is also progressing. After the relations improved with US, it is felt by many that relations with Russia has somewhat lost the warmth it had. PM Modi tried to woo Russia through Sochi informal dialogues and largely succeeded too. However, Chinese intent of expansionism and Russian affinity to them has cast some shadows on the bilateral relations.

Trust Deficit with the US. Indo-Russian relation has withstood the test of time for decades with excellent coordination and they have never interfered in the internal matters of each other. On the contrary, even when US called India its strategic Defence partner, they didn’t hesitate from interfering in internal matters of India be it the American’s decry of CAA, abrogation of article 370, handling of radical Islamic protests in several Indian cities. Besides, USA often plays a hypocrite on Human Rights issues esp while dealing with radical Islam and Islamic extremists in India as well as dealing with state-sponsored terrorism emanating from Pakistan. All these do anger and compel India to be critical of the US.

Just when India thought to be a close US Defence partner, their 7th Fleet intruded into India’s Exclusive Economic Zone (EEZ) around Lakshadweep and the Indian Ocean in 2021 without information. Even worse was their statement... to assert “navigational rights and freedoms”. This was seen as provocative. Just when QUAD was progressing well, the US formed AUKUS without its strategic defence partner getting a hint of air. All of these have caused the 'Trust-Deficit' in the Indo-US relations. On the other hand, USA invariably keeps the sword of CAMOSCA hanging over India for our trades with Russia, Iran or any other country under US sanctions. All these happenings have forced India to keep a reasonable distance from the Americans. USA doesn’t deserve full Indian trust as yet. They cannot be trusted to come to India's assistance in case some dire situations develop at the UNSC or other international fora, contrary to what Russia has been doing. This is possibly the one single reason why Indian Govt is justifiably maintaining a neutral stand while choosing between Russia and the EU/NATO/USA or their allies.

India, a Formidable Military Power. Let world have no illusion "India is no Ukraine" or Taiwan in Military might. Indian adversary, China cannot think of any full-scale misadventure either alone or jointly with Pakistan, either now or in future. 'Atmnirbhar Bharat' Plan is fast boosting the Indian Defence. Joining NATO will be costly for India esp when it can defend itself and that no other NATO countries share common security concerns. QUAD is another platform that may also assist India’s security if the member nations infuse the military/security teeth to it, which is unlikely at least at this stage. Quad security elements should be able to leverage any threat to India by its adversaries.

Russia-India-China (RIC) Block. The erstwhile Russia-India-China (RIC) block is almost defunct after Indian proximity towards the USA in recent years and more so, after the Chinese misadventure in Galwan as well as their expansionist intent elsewhere against India. However, if RIC could undertake a diplomatic initiative in building mutual trust among member states, it could be a very formidable block. Firstly, the Chinese have to be prevailed upon… firstly, to commit to a non-expansionist approach towards India, return the occupied territories of Aksai Chin and demarcate the international border in accordance with various past agreements. Secondly, China has to reassure of not destabilizing India either in tandem with Pakistan or through other insurgencies in North-East through various Naxal/Maoist groups. Although very complex, this could be achieved through result-oriented sustained Indo-Russian or Sino-Indian diplomacy. It will be in the interest of both India and China to be friendly neighbours than adversaries esp when the global situation of a possible 3rd World War is looming large. If achieved, RIC block could become a formidable economic and security force in the not-too-distant period. This could be a win-win situation for all three members of RIC bloc in many spheres of their cooperation and relation. This may not necessitate downscaling of the Indo-US or Indo-EU relations. At present though, there are too many ifs and buts in this possibility and too many ends of loose threads to be tied.