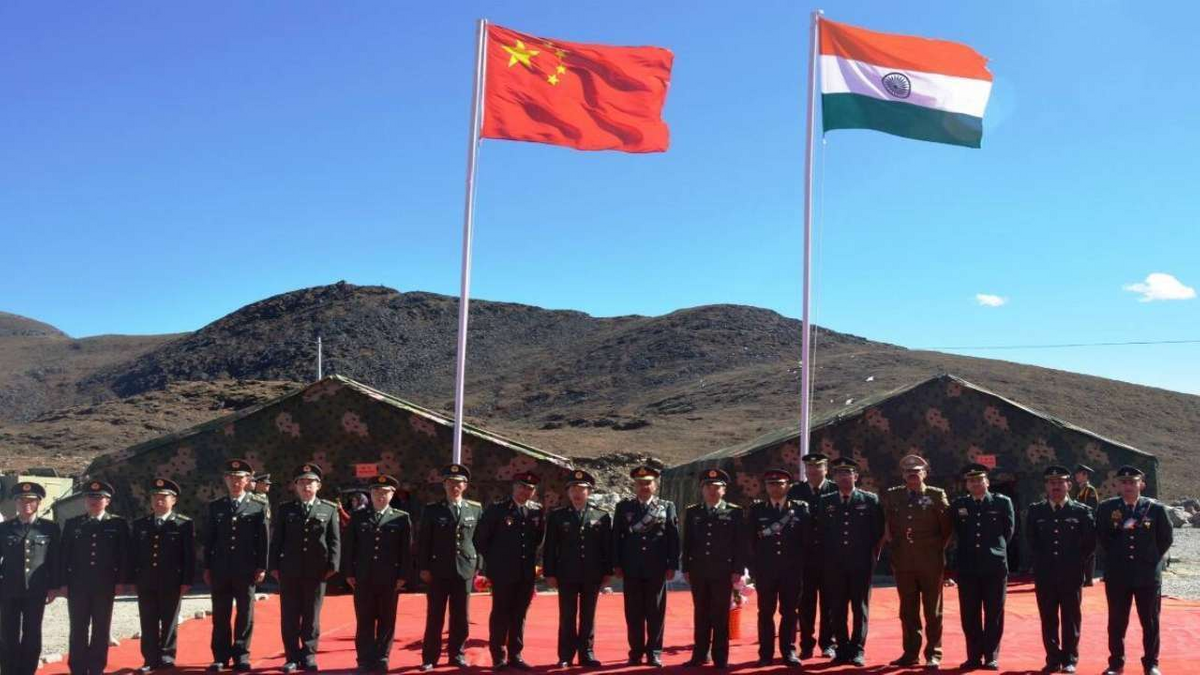 India and China are the two most populous nations in the world. Both are neighbours but unable to understand each other’s language. Both India and China had been plagued with a period of occupation by the foreign forces. Both gained independence in the late 1940s one from the British and the other from Japan. One’s march to independence was through non-violence but the other had adopted the deceit means of Communism with guerrilla-like warfare technique which did not hesitate killing own nationals too. India’s independence was brutalised by its painful partition demanded by the bigotry of own Muslims that made the Indian territory even smaller. On the other hand, Chinese Communist Party (CCP) adopted an expansionist agenda right after their independence by first occupying Tibet and later East Turkestan, Inner Mongolia, Manchuria, Unnan and other smaller states like Hainan through reprehensive forcible means. India adopted Democracy in which all nationals had their say but China adopted the one man and one party rule of Mao’s Communism. In the successive periods to Tibetan occupation, the Chinese disregarded all prior Indo-Tibetan border agreements but Nehru remained clueless. China exploited all subsequent opportunities to rise at the international platforms incl UNSC but Nehru preferred to remain subdued and the price of erstwhile inactions are being paid by India today…be it on the LAC or the UNSC.

There was one big difference between the Indian and the Chinese freedom. India was occupied by the brutal and inhuman Islamic rulers for many centuries which created deep scars in the psyche of all people of India religions, be it Hindu, Jains, Buddhist or the Sikhs. All had suffered immensely in the hands of the Muslim rulers…be it the individuals, families, societies, the nation and its treasures…both physical and intellectual. No sooner the Muslim rulers weakened, the British got hold on our land…and the occupation continued. Nearly 700 years of occupation possibly dampened the will of the people to some extent. It took a long to realise what had stuck us. On the other hand, the Chinese nation was occupied largely in the physical terms…changing hands at times to another neighbour’s rule. Hence, the latter got on to their feet much quickly and strongly but a battered mind-set kept us crippled for reasonably long time. We have people on our land who may like to bow their heads on the faded foot-marks of the Muslims or the British rulers whereas the Chinese have already eclipsed the glorious past of Mongolia and are trying to prevail over the Japanese and the Kuomintangs essentially in Taiwan.

There was also significant difference in the way that India was liberated from the British through mainly non-violent freedom movement under Gandhiji. However, Chinese Communist adopted the violent guerrilla warfare for their liberation. It is relevant mentioning the modality of the independence as it clearly demonstrates the psyche after independence. India after independence, continues possessing the subdued approach and trying to fight wars on our own land whereas the Chinese continue their dominant approach…by capturing Tibet, Xinjiang, inner Mongolia and several others. Their dominant mind-set continues showing its salami slicing effects on Ladakh, Sikkim and Arunachal. India continues reacting to the Chinese pin-pricks even after 73 yrs of independence…still trying to gain some strength on our feet whereas China has almost become a super power in the world.

Could India speak in a language that the Chinese could understand? Surely it is not the Mandarin. Till now we have not realised what that language could be. Should that be passive defence, offensive defence or defensive offence? Thanks to the Modi govt that we have come out of playing passive defence. Although we have not permitted the Chinese to dominate or dictate us after our pathetic show in the 1962 war, we seem to be far behind to be able to speak the language that the Chinese could understand to realise for themselves…no more bullying India.

Almost every year, India is at UN/UNSC trying to defend itself against Pak/China sponsored Human Rights abuse allegations. However, India has seldom brought them, well knowing that they are the worst violators of Human Rights. As such China gives it a damn for their numerous concentration camps against Uighur Muslims or the religious repression against Tibetan Buddhists. Similarly, whenever Pakistan is cornered, China or the other Islamic States come to their rescue. This is the Indian report card of serving at the UNSC in the role of a non-permanent member seven times in Prior to the present term…during 1950-51, 1967-68, 1972-73, 1977-78, 1984-85, 1991-92 and 2011-12.

Every time that our own PM visits Arunachal, China issues a warning but India has never issued such warning when Chinese CCP Chairman enters their occupied territories in Tibet. India starts developing infrastructure along LAC, China objects or issues a warning but when China does the same or even builds villages inside Arunachal, we are mum. MEA issues a statement that we are strictly watching the development. China declares the entire LAC, McMahon line, Arunachal, Ladakh as disputed areas for India not to venture there but China carries out with their construction within Indian part of Ladakh (CPEC under PoK), India remains mum. How long will this submissiveness continue? Either we should adopt the policies of Nehru…that not a single glass grows in Ladakh so let it be occupied by China…or have strong resolve to defend every inch of the land if not take back the Aksai Chin lost during Nehru era. In New India, could we give some exercise to the Chinese of their own game, the Chinese Checker? Could our Mountain Strike Force devise a way to start giving pin-pricks to the Chinese? There are >3700 Kms of LAC for it. Could Chinese be made to swallow a bitter diplomatic pill…of taking back our ‘One China Policy’, recognising Taiwan, make the QUAD (or Quad plus) a full-fledged Security alliance? Could the Tibetan Govt in Exile be recognised? Could a small piece of land in Aksai Chin be leased out to the US military to maintain a surveillance base? This is likely to prevent any future Chinese misadventure in the desolate Indian territory. Could a military alliance be formed with US or USSR with all smaller nations around China? Well these are the possible dialects that India could speak and Chinese will have no alternative but to comprehend. Unless China is made to pay for misadventures towards India, they will be least inclined to resolve and demarcate the Sino-Indian border. Unless the border row resolves, India will have to pay the price of the past incompetence by its leaderships.

Could New India give some exercise to the Chinese in their own game, the Chinese Checker?

-Our Mountain Strike Force devise a way to start giving pin-pricks to the Chinese all along LAC.

-Chinese be made o swallow some bitter diplomatic pills as follows:-

-make the QUAD (or Quad plus) a full-fledged Security alliance.

-Tibetan Govt in Exile be recognised.

-Small piece of land in Aksai Chin be leased out to the US military to maintain a surveillance base.

-A military alliance be formed with all smaller nations around China.

-Assist Uighur Muslims have the religious freedom through Afghanistan/.

-If China continues dragging feet on international border, make it unilaterally and adhere to it.

China has of late understood the importance of the economic power. The current stand-off with India has made it loose many 10s of billions of dollars in trade. India is a huge market for any world economy to not to take note of. India must exercise the alternative import of the raw and unfinished goods from Taiwan and elsewhere. Indian govt has done well to react to Chinese aggression even if that is tokenism for the dragon. Totally isolating from the ASEAN tariff-free market may not be in Indian interest but all the same, India cannot risk Chinese dumping. Self-reliant India has to be the mantra to challenge Chinese economy. It is a very fine thread-walk for India.

Even after our 20 soldiers lost their lives at Galwan and approx. 40K soldiers are deployed in a bitter stand-off, not once has India or China taken a step towards drawing the permanent international border. For $ 16 trillion economy of China, such stand-off could be shrugged off but it matters a lot for the 3 trillion-dollar economy of India. At times, it looks like a conspiracy…that the day PM Modi announced to make India $ 5 trillion economy and the Chinese pressure started all along LAC. The day PM Modi announced a plan for “AtmNirbhar Bharat”, the Chinese started of their well-known Salami Slicing in Ladakh and Arunachal. China has shown two fingers to the previous 5 agreements of peace & tranquillity and started occupying the no-mans’ land in Galwan, Pangong. It was their clear disregard to the bilateral pacts. China continues making roads & rails close to the LAC and expects India not to make any. China unilaterally declares a territory disputed and expects India to remain clear of it. After the Galwan violence, 9 rounds of military level talks, two minister level talks…all have yielded no results. Clearly, the Chinese do not want to understand the language India is speaking…whether it was 5-point agreement at Moscow in Jun 2020 or MEA’s 8-point agenda on 28 Jan 21. Clearly, India through our MEA Dr Jaishankar has to speak a different language, something that they can understand. Unless that happens, every dollar that India spends on its defence, buying military hardware from abroad, the decades of delayed task of poverty alleviation takes a beating. Both Chinese and Pakis will glad to see India in this state of arms buying, something that will be counterproductive to the Indian self-reliance. As such, Corona pandemic given to the world by the Chinese have brought the world at economic brink.

Thanks to the decades of flawed diplomacies towards our neighbours, our defence Forces are feeling the heat at the international borders. This is surely to the advantage of Pakistan and China. Both have combined together to pose a simultaneous threat at LoC and LAC. The Chinese, through their debt-trap, will surely make Pakistan as one of its colonies in the coming years and decades but that should not bring any cheer to India. India will have to find the ways and means to rise from the shambles it finds right now.

For the democratic India where subversive voices of some of our opposition political leaderships keep betraying the nation, it is certainly not a good sign. When we clean the floors of our house, the insects are bound to be swept-off. Our patriotic people may like to take a call if it is time to sweep-off the voices of treacheries from our land…from whosoever it may be. These are the voices that shame us for no reason…that shamed us while being at Docklam…after article 370 abrogation…after implementing CAA…and now pricking us in the form of sabotaging protests by the Dalaals of the Farmers. India has been paying a big price of being democratic state where half of our population do not understand the meaning of democracy, where majority of them are only interested in taking their pound of flesh from the nation and give nothing in return, where approx 19% people often talk of causing another partition (even if loosely), where nearly 40 million people are illegal Bangladesh and Rohingya migrants draining our resources in the name of “Vote-Bank” politics. How could India fight its adversaries and enemies when we have numerous enemies within? When will the treacherous politician understand that there is a very thin line from being critic of government to being anti-national. Will there be a time when someone rises against the JaiChands and Mir Qasim on our land and says enough is enough. Till those days come, we possibly cannot speak the language the Chinese can comprehend. It is a sad narrative but that is what it is.