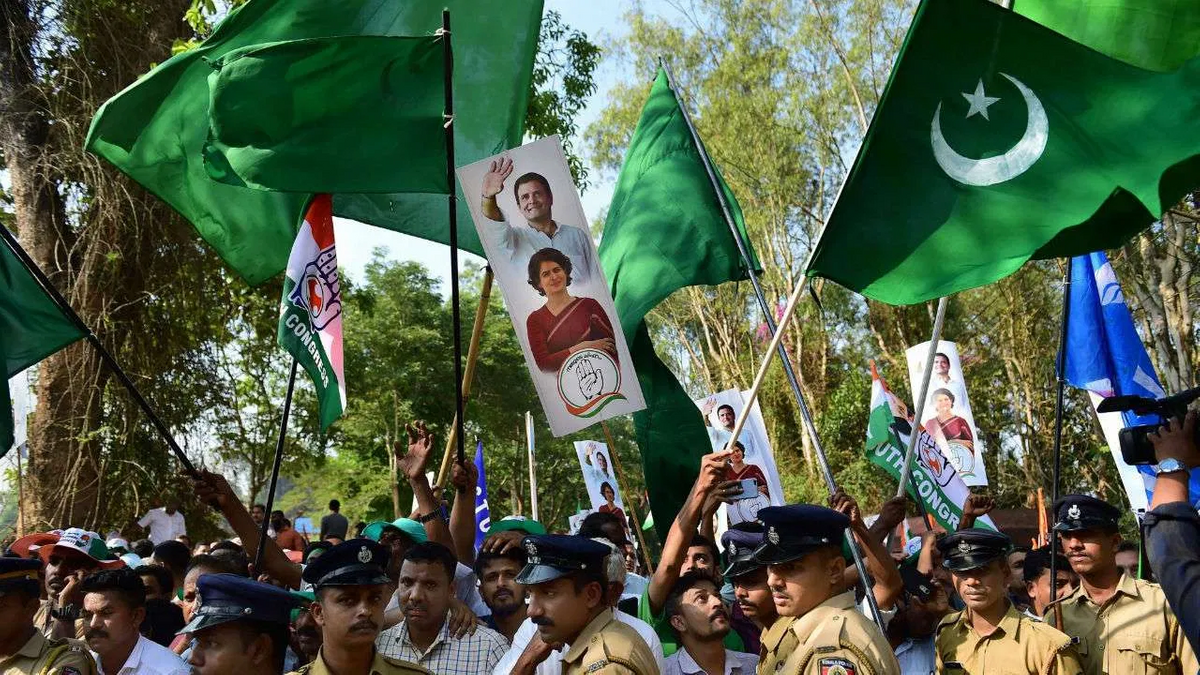 In the 2019 Lok Sabha elections, Congress President Rahul Gandhi felt he was at a very shaky ground at Amethi in UP. As such many of the Congress utterances in those times had angered the nationalists in India. These utterances had been in many fields to please the radical Muslims in India, the anti-national thinkers and some ‘Modi-haters’ among majority Hindu communities too. Hence, he preferred to file his nomination from Kerala’s Muslim majority Waynad Constituency with the support of Muslim League where Muslims are 45%, Hindus 41% and Christians 13%. There, the largely undivided votes of the Muslims, majority of the Christians along with many traditional Congress Hindu votes were on offer for Rahul Gandhi. Many of the onlookers felt that Rahul Gandhi was campaigning in some Pakistani constituency because the Muslim League flags resemble that of Pakistan.

The Islamic party IUML has had its own ideologies of trying to tread right of the centre path but after the advent of Radical Muslims around the world, the Muslim League harbors and encourages many such ideologies as espoused by its partners SDPI and PFI. All of them espouse the cause of Islam. Of late, amidst the growing influence of the radicals & Jihadists groups among the Muslims in Kerala to work for the cause of Global Caliphate, Muslim League too is trying to outperform the SDPI & PFI acts. Hence, virtually, there is no difference among them. As recently as 11 Sep 20, the Muslim clerics were heard raising the communal passion in Kerala, saying it could take just around 10 yrs in turning the state as part of Islamic caliphate.

The Hindu, Buddhists and Christians having already seen their fates under Muslim majority in Jammu & Kashmir and elsewhere in the world, did raise the ‘red flag’ unfolding but their voices were muzzled in Kerala. They lacked the unity to speak in single voice. Hence, the writing is on the wall that the Muslims will overwhelm them with their traditional call…’Convert, Flee or Die’. This is a famous ploy witnessed in the recent years against Yezdis in Iraq, Pandits in Kashmir, Christians in Syria, Egypt, Lebanon, Sudan, CAR or elsewhere. British Home Secretary Geremy Hunt’s report of Christian Genocide in the Middle-East nations have gone unheard even at the UN. The world body seems to be reluctant to raise the issue of Islam-led genocide of the religious minorities in the numerous parts of the world.

There have been several communal attacks on the Hindu groups in Kerala at the behest of these three groups. Hence, Rahul Gandhi from Waynad with majority Muslim voters, played its communal card. Many Muslim groups don’t consider Rahul Gandhi a Hindu as he was born out of a Christian mother and a ‘Parsi by birth’ father. Hence, the Muslims of Kerala did not have a guilt of voting a Hindu whom they hate. Bigotry of the Kerala Muslims against fellow Hindu and Christians have been evident in the last several decades. Open threats against Hindu & Christians in Muslim dominated areas, violence against any RSS or BJP supporter, acts of rampant ‘Love Jihad’ against Hindu and Christian girls and other acts of Jihad…be it Jihad-al-Nikah and Jihad-al-Da’wah.

The Sunni Yuvajana Sangham (SYS), the youth wing of the Samastha Kerala Jamiyyathul Ulama marching on the streets of Mallapuram calling for Sharia law in Kerala must have sent shock waves all over India but our thick-skinned politicians feign aloof, ignorant.

In spite of all these happenings, Hindu and Christians on the verge of annihilation at the God’s own land, Kerala, remain divided, unable to speak in a single voice. Both the Congress and the Communists have brought Kerala to this stage. Kerala has become the hub for the radical Islam through various Tanzeems…predominantly the SDPI and the PFI. Both Congress and Communist leaderships whether at the State level or in Centre, don’t like anyone to speak on the Islamic rumblings in Kerala. Anyone speaking about the clear threat, is branded communal…and the radical Muslims have a free run in todays’ Kerala. Whosoever, is comparing Kerala turning in to Kashmir, is not far away in their thought. In Kerala it is gradually becoming “Wake-Up or Perish” threat for the Hindu and Christian communities and the present Congress leadership is okay with it. Rahul Gandhi fishing in such troubled water, has absolutely no shame. Communist Party of India (M), an ally of Congress and ISF in West Bengal, is feeling the heat amidst growing radical Islamic clouts in Kerala. They have alleged that the Congress has surrendered to the radical Muslim groups in Kerala and there is truth it too. Rahul Gandhi led divisive and highly communal Congress party is seeing its future in aligning with the radical Muslims in all states having substantial Muslim presence.

Thus, defying the senior party functionaries in Congress, when Rahul Gandhi sought alliance with a highly communal Maulana Siddiqui in West Bengal…the cleric of Furfura organization, it was no surprise. Rahul Gandhi has now acquired a largely radical Muslim face in Assam too where he has formed alliance with a radical outfit of Badruddin Ajmal's All India United Democratic Front (AIUDF). With IUML (having SDPI & PFI in their wings) in Kerala, Maulana Siddiqui’s radical group in West Bengal and Badruddin’s radical AIUDF in Assam; Rahul Gandhi has turned today’s Congress in to a complete communal and radical looking party that many of their leaders like Anand Sharma (and his G-23) are trying hard to dissociate with. Any Hindu having conscience, would like to leave Congress.

Siddiqui in his several addresses (https://twitter.com/i/status/1245382147378036736) at the Furfura mosque, has been vocal to cause death to the Indian (Hindu), work for making the Muslims a majority community in West Bengal and Liberate his motherland (WB) to own (Muslim) rule.

He is a perfect Hindu-phobic voice in West Bengal that Rahul Gandhi wants to polarize the near 30% of Muslim voters. He has the clout through the Furfura religious foundation that could raise passion among the youth Muslims, most of whom are already believed to be radicalized. In his electoral calculations of already having tasted the fruits of the company of the IUML led radicals. It is a dangerous game Congress is playing in the sensitive border state of West Bengal where the ruling parties since independence, have been playing the communal “Vote-Bank” politics. Most of the Muslim League cadres having allegiance to Jinnah, who did not want to migrate to newly created Pakistan for them, joined Communists who made them flourish. These radicals later migrated to Congress and then to Trinamool Congress, which is nothing but an offshoot of the erstwhile Congress. In the last many months of the Mamata-ship slowly sinking, they tried to jump over to the BJP. However, the BJP leadership is skeptical of the radicals and treading cautiously. Hence, Rahul Gandhi found it convenient to forge alliance with Siddiqui. Now Siddiqui and Owaisi taking out the Muslim ‘vote-bank’ of Mamata, her political fall looks imminent. However, only time will show the real picture of the electoral outcome.

Congress is treading a dangerous path of aligning with the radicals & jihadists in Kerala, West Bengal and Assam. The party has donned a shameless communal masks for a narrow political gain. The Communists are facing the heat in own ruled state of Kerala. It is a very strange electoral alliance that both Congress and Communists are facing in each other. However, far away from the communal and partisan politics, India as a nation is being challenged to preserve its integrity. Muslim majority Kashmir is already posing enough threat. Surely Pakistan will find another opportunity in fueling the fire in all these 3 states having substantial population. All these 3 states have potential to become the breeding ground for the Jihadi groups. They must be checked now. The majority Hindu have to play their card safely…for it is only their votes that can save them from being annihilated in these three states.