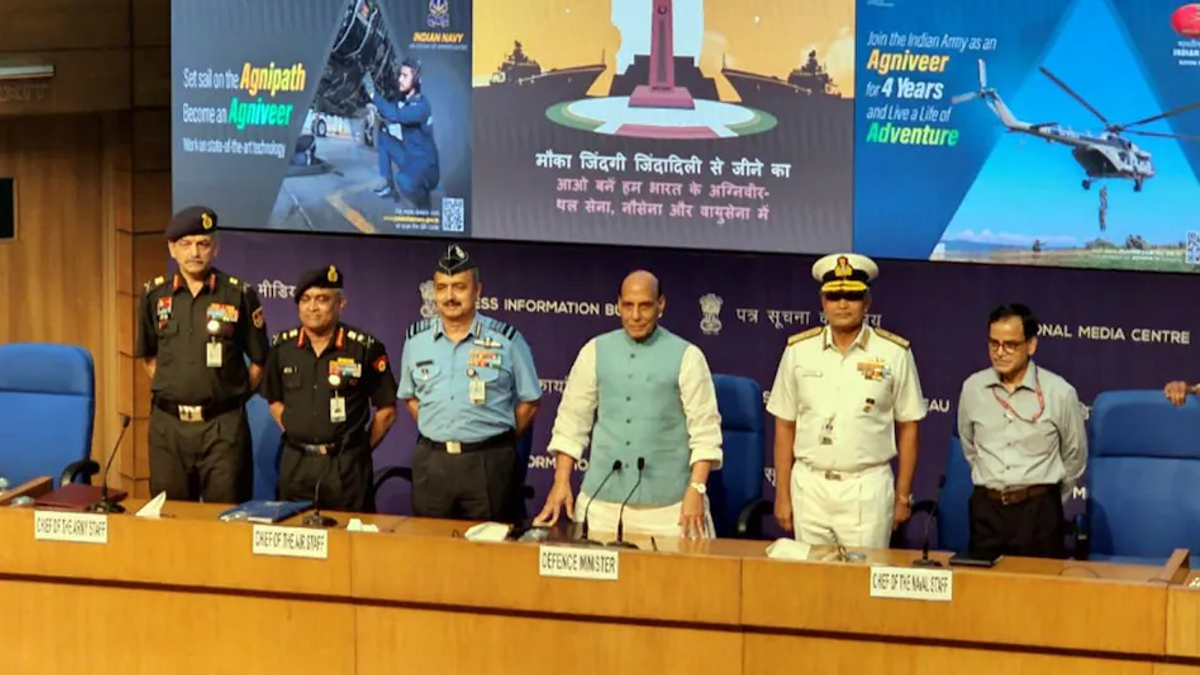 How a good, revolutionary and path-breaking initiatives of govt policies could be poorly executed, is the hallmark of Modi 2.0 ministers. First, CAA rampage by radical Muslims and some opposition politicians was sabotaged due to poor execution. This was soon followed by another revolutionary and path breaking policy of “Farms Acts” that too could be sabotaged by the middlemen thriving on farmers’ blood. They too were supported by Congress and Communist parties. Then came another revolutionary policy of Agnipath recruitment scheme ushered on to the public without its nitty-gritty being given much clarity.

On a day when the angry Congress party was already on roads trying to defend their corrupt party leaders; they seemed to ask their party youth to go on rampage. It could be termed a collective failure of the three Service Chiefs as well as the Defence ministry, not to have gone public with full clarity on Agnipath Scheme on two counts…firstly whether the new recruitment of Agniveers supersedes the age-old Armed Forces recruitment policies and secondly, the clarity on the welfare and future of the 75% of them released after 4 yrs without pensions. The spokespersons of BJP on various TV channels were suggesting that the Agnipath recruitment is over and above the old scheme but Govt’s stand was unclear. On 19 Jun, the senior officers of the Armed Forces made their stand clear that Agnipath is the only method of recruitment and that they are going through the recruitment process in the coming weeks and months. They also clarified that various ministries of the Govt are coming up with policies to provide priority to the released Agniveers after 4 yrs of service.

There is no doubt that the Scheme is revolutionary for the Armed Forces. They have been pursuing it vigorously for the last 2 yrs or so. The entire selection will be transparent through all-India basis of online examinations for the Navy and IAF. Army on the other hand, will continue recruitment on their existing zonal patters. The recruitment objective is new and in all probability, beneficial to both services and the public as explained in the subsequent paragraphs.

It is felt that NCC cadets with B/C certificates could have been given some preferences although C certificate holders have options to appear before service selection boards for appointments as commissioned Officers. The medical standard of fitness for the 4 yrs entry may have to be reviewed with some waivers. More options of online courses may be permitted to them as long as it doesn’t interfere with their daily service duties.

Is it beneficial to the services IF it provides 4 times (?) the normal numbers of the new recruits for general and other duties as mentioned by some BJP spokespersons. The Govt stand was not very clear. However, as it is becoming clear, the number of intake will not be 4 times but surely higher that the previous intakes. There is also a lack of clarity on the training patterns as to how much of the specialised trade skills they could be imparted in the proposed 6 months. Surely, they will have to continue with the On-Job Training (OJT). All three services are somewhat convinced that the Agnipath scheme is beneficial to them and that their skill levels will be commensurate with their specific duties.

As the entry of Agniveers will be greater than the retirements, it will be very beneficial to the public even if only for 4 yrs. Thereafter, 25% could join the permanent Armed Forces Service but many of them may like to continue further education beyond 12 Std imparted through National Institutes of Open Schooling (NIOS) while earning salaries. Those having motivation for long service will try to perform at their best, thus benefiting the Services. Many released Agniveers with 12.7 lakhs in their bank accounts, may pursue higher education of Medical, Engineering, Management, Commerce; join other paramilitary forces offering priority; or start a new job under self-employment. If the services had not brought the new policy, those X + additional numbers would have toiled in public, in their homes, school or some petty jobs in unorganised sectors. Actually, several nations in the world have such short-term services policies either on voluntary or compulsory basis without offering such a huge financial benefit at the time of their release. Indian youth should feel proud for the excellent offer.

In an attempt to become permanent, there could be an effort by some to adopt unfair / illegitimate means to seek favours of their immediate bosses. Both Govt and services have to ensure that no exploitation/unfair means are adopted towards this. Further progression of their career through promotions and long services shall remain the same as in the old policy but it may also be appropriate to give weightage to the 4 yrs of Agniveer training in their permanent employment and promotions.

There have been violent protests and demonstrations in many states for the career prospects of the Agniveers who have to leave after 4 yrs. More than the aspirants, it is their trainers and the opposition political parties who are worried about failure of their agitation. It is they who are inciting them to indulge in violence and arson. Several politicians of RJD, Congress and Samajwadi party have already been arrested for inciting violence. The face-off seems more between Modi Govt and the Opposition politicians who want to show down the govt, forcing them to take back the Agnipath Scheme. Although there are assurances coming from paramilitary services and others for giving priority to the released Agniveers in their departmental jobs, opposition politicians have created enough doubt in their minds. The govt has to come up with entire policies in black & white by bringing out all terms & conditions. If this policy replaces the old policy, then govt must render age-relaxation for the initial 2 yrs of recruitment so as to be fair to those who could not be selected in the last 2-3 yrs owing to the Covid19 pandemic.

Once the opposition parties esp Congress tasted blood by inciting the youth with disruptive acts, other opposition parties too jumped-in just like a good Farm Act was sabotaged. Priyanka Gandhi says the protests will continue till Modi-Govt is overthrown. Kisan Union of Tikait wants to jump in the protest. The ruling coalition in Maharashtra has incited the paramilitary forces to undertake march to New Delhi in defiance against the new policies. Defence Ministry has to be sensitive enough to come out quickly with enough assurances and clarifications in black & white unlike an adamant and arrogant Agriculture minister during Farmers/ protests. It was good to see the 3 Service senior officers to clarify many of the doubts on 19 Jun 22. They also dispelled the opposition politicians/ propaganda that the new policy was unveiled hurriedly. They clarified that the aspirants having indulged in criminal acts of arson and violence will not be able to join as Agniveers. Under such circumstances, it will be prudent for the aspirants and their parents/guardians to believe what the Chiefs of the 3 Services say…that the scheme is very good both for the Armed Forces as well as the aspirant Agniveers.

The raging fire of ‘Agnipath’ must be doused in the next few days before any further damage takes place. Our youth too will have to be sensible not to fall prey to the ulterior motives of the politicians inciting for causing arson on the streets. The Armed Forces have made it clear that anyone with a background of loot/arson will not be able to enter Agniveer service. Hence, it is extremely important for them not to indulge in such acts. It has also been made amply clear that the three services are going ahead with notifications and recruitment of the Agniveers. It is time for the political opponents of Modi to step back and let the Armed Forces have its way. They urgently want the recruitment to be initiated.